Bloody Puddles is an Expert Map in Bloons TD 6, first introduced in Version 13.0, along with the Beginner Map Carved.

This map is a more difficult version of Muddy Puddles with 5 paths and multiple entries and exits per round. There are extra puddles on the map, a broken jeep and some mossy stones that prevent towers from being placed there (The jeep blocks line of sight too) along with a few more trees around the map. Set at night, the map setting is darker than its easier counterpart. The top-right corner tree can be tapped to let a kiwi bird run across part of the map.

There is a gimmick where attempting to remove the broken jeep for $1000 will result in the obstacle-removing Chinook failing, creating another block for line of sight. Afterwards, the player may tap either the broken Chinook or the jeep to remove the Chinook, the jeep and the nearby stones for a single purchase of $500. Effectively, a total of $1500 is required to remove both obstacles at once.

Balance changes are listed in terms of favorability for the player. 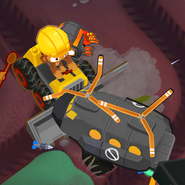 Bulldozer pushing away the broken Chinook and the jeep