Blons (also known as Corner Map) is an Expert Map[1] in Bloons TD 6. It is one of two maps that were introduced in 24.0, the other being Balance. Unlike all other maps in the game, it is only initially accessible by hitting the "Random" button in the Challenge Editor repeatedly until the editor creates a challenge using it. After beating a challenge on Blons, the map becomes accessible in the editor's map selection menu. Because of its limited accessibility, medals cannot be earned for this map.

As of Version 24.1, it was no longer accessible by hitting the "Random" button repeatedly in Challenge Editor, but players who still have the map in the testing challenge save will still keep it. In Version 24.2, the Blons map is available since April 1st 2021 on Challenge Editor and Custom Challenges only, including Advanced Challenges. The Blons map can now be unlocked by simply completing any challenge involving Blons.

Blons is a grassy place with an extremely short path wrapping around a small part of the top-left corner. Bloons enter from the left. There is a small pond near the bottom-right. Several pigeons wander in the grass. Like on Another Brick, the pigeons can be scared by tapping on them.

This map has the absolute shortest path in the game, with a Red Bloon only taking around 4 seconds to reach the exit on Medium difficulty.

Due to its exclusivity to the Challenge Editor, Blons gives no rewards for completion.

Playing a challenge on Blons

Blons in the Challenge Browser, available since April 1st 2021 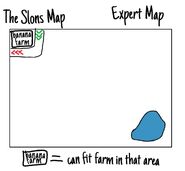