The Blade Shooter is the third upgrade of the Tack Shooter. Instead of the tower shooting tacks, it shoots larger razor blades with more accuracy. This upgrade will also pop more bloons and shoot faster.

In BTD3, the upgrade is the second upgrade for the first path.

In BTD4, it is the third upgrade for the Tack Shooter.

In BTD5, the Blade Shooter is the third upgrade of path 2. According to the in-game description, it shoots blades in all directions. Each blade pops up to 2 bloons per shot. It costs $680 on Medium.

In BTD6, the upgrade returns as the third upgrade of Path 2. It costs slightly less than in BTD5 though with much more popping power. Each blade covers larger surface area, with each blade popping 6 bloons per blade instead of 1 for ordinary tacks and attacks 18% faster. It costs $550 on Medium.

In BTD4 iPhone/iPod Touch, blades from Blade Shooter are darker and smaller.

In BTD5, the Tack Shooter emblem is replaced by a blade. The blades of the Blade Shooter are still visible but they only show half of the blades unlike BTD4.

In BTD6, the Tack Shooter emblem is also replaced by a blade. The tower is blue instead of pink.

The Blade Shooter was formerly not often upgraded besides upgrading to the more popular Blade Maelstrom, but a series of buffs have made this upgrade more comparable to the Tack Shooter's more powerful Tier-3 upgrade, the Tack Sprayer.

After 4.3.1, players began to use the Blade Shooter more often, as it deals better against Grouped Bloons much more reliably than Tack Sprayer, despite being somewhat less effective against Spaced Bloons. 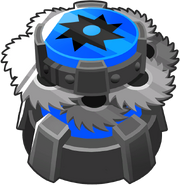 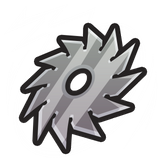 Instamonkey icon for Blade Shooter
Add a photo to this gallery

Retrieved from "https://bloons.fandom.com/wiki/Blade_Shooter?oldid=255354"
Community content is available under CC-BY-SA unless otherwise noted.