The following is a list of statistics of a Boomerang Monkey with Bionic Boomerang. It includes its base statistics and all associated crosspathing interactions. Expand the box on the right to see further information.

The following are a list of wiki-written damage types associated by a Boomerang Monkey with Bionic Boomerang. These damage type statistics include how it attacks and how these attacks would affect bloons. Expand the box on the right to see further information.

The Bionic Boomerang is usually used as a stepping stone for its higher tiers Turbo Charge and Perma Charge. It doesn't have much of a specific niche, being an average and well-rounded early DPS tower.

Crosspathing in BTD6 (path 1 on top, path 3 on bottom) 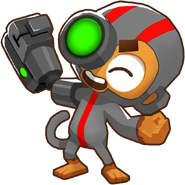