Bionic Boomer is the third upgrade on the second path for the Boomerang Thrower that made its debut in Bloons TD 5. Although the description states it fires twice as fast, it actually shoots much faster. In BTD5, it actually fires around 3.2x as fast as a non-upgraded Boomerang Thrower, 4x faster than a non-upgraded Boomerang Thrower with the Glaive Thrower upgrade. In BTD6, it will shoot 5x faster than a non-upgraded Boomerang Monkey, plus even more attack speed with Glaives. The upgrade makes the tower shoot a nearly constant stream of projectiles, shredding the Bloons away. Although this upgrade diminishes the need for the Boomerang Thrower's need to be placed near an elliptical curve, the tower will do much better if it's placed near one. This is because the boomerangs/glaives' movement will "follow" the curve, covering that entire curve and popping bloons more effectively. However, it's almost impossible that the boomerangs or glaives follow that elliptical curve because, like most of the towers, the tower has its Target Priority. With the fully-upgraded Boomerang Dojo, this tower is extremely powerful as it is reliable. In both BTD5 and BTD6 it costs $1360 (Easy), $1600 (Medium), $1730 (Hard), $1920 (Impoppable).

In BTD6, this upgrade returns, increasing the attack speed by 5x, to 0.24 seconds per shot. It also does +1 extra damage to MOAB-class. It can be unlocked with 2500XP.

The Bionic Boomer as a BTD5 leak 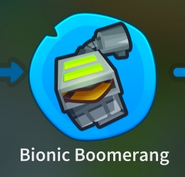 Crosspathing in BTD6 (path 1 on top, path 3 on bottom)
Add a photo to this gallery