In BTD6, this upgrade returns. The power of Bigger Stacks tends to be situational now, since purchasing Permaspike will not actually double the number of spikes per pile as typically expected of other upgrades. However, all other upgrades bought in combination with this upgrade (except Spiked Balls and subsequent upgrades) will grant a steady 10 spikes per pile. It costs $600 on Medium.

The upgrade icon in BTD4. 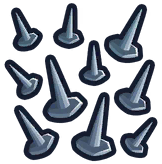 Instamonkey for Bigger Stacks
Add a photo to this gallery

Retrieved from "https://bloons.fandom.com/wiki/Bigger_Stacks?oldid=253560"
Community content is available under CC-BY-SA unless otherwise noted.