Bigger Jets is the first upgrade of the second path for the Heli Pilot in Bloons TD 6. It increases the movement speed for the Heli Pilot from 40 to 70 units/second, for a total of 75% faster flight speed. There is a special interaction with MOAB Shove that increases knockback potency versus MOAB-class.

Bigger Jets improves the overall performance of the Heli Pilot by improving its flight speed. This helps it become better suited for micromanagement and therefore will have a considerably easier time chasing faster bloons. In addition, there is a special bonus for MOAB Shoves with this upgrade that allow them to deal greater shoving knockback versus MOAB-class.

The difference in base Heli speed has increased by implementing a nerf to base Heli Pilot and a buff to this upgrade, specifically designed to encourage more Path 2 crosspathing. 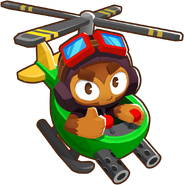