Berserker Brew is the third upgrade of Path 1 for the Alchemist in Bloons TD 6. An Alchemist with this upgrade will throw a buffing potion every 8 seconds at a nearby monkey which grants it +1 damage per hit, +10% range, +2 pierce, and +11.1% attack speed (x0.9 attack cooldown). The Berserker Brew potions last for 5 seconds or after 25 attacks (6 seconds or after 40 attacks with 3-2-0) from the targeted tower, whichever comes first. The chosen target is the closest buffable tower that does not already have the buff or the buff cooldown. Towers require 5s (4s with 3-2-0) before being able to be buffed again by any Alchemist (only affects Berserker Brew and Stronger Stimulant); cooldown starts as soon as they receive the buff.

Unlike Acidic Mixture Dip, Berserker Brew is always thrown to the tower closest to the Alchemist.

Alchemists with this upgrade can throw buff potions at nearby towers, giving them tower buffs. Acidic Mixture Dip is thrown on a random tower and prioritizes those without an AMD buff. Berserker Brew potions always target on Close relative to the Alchemist, and ignores already brewed targets or those who have very recently been brewed.

Berserker Brew is one of the most cost-effective ways to greatly empower a nearby tower, improving the attack speed, pierce, and damage of the affected towers. In particular, it is one of the best options when paired with towers that attack relatively slowly but possess a high number of projectiles, such as Bloonjitsu, Triple Guns, and Recursive Cluster. The powerful brew effects can be enhanced even further when upgraded to its next upgrade Stronger Stimulant, and the same upgrade provides overall higher brew uptime for most towers.

Berserker Brew's supporting role to increase damage, attack speed, range, and pierce is seen as a valuable asset on many CHIMPS games. While not as overpowered as it was when it was first released, Berserker Brew is still a very popular supporting tower on CHIMPS, second to its upgrade Stronger Stimulant. Although not as broken as Stronger Stimulant when it was first released, Berserker Brew formerly had an extreme synergy with fast-attacking towers until the Version 6.0 nerf. Later updates buffed the Berserker Brew's crosspathing benefits by a noticeable amount. 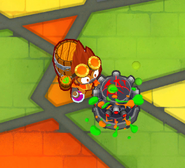 Berserker Brew Alchemist applying both brew and AMD onto an Overdrive 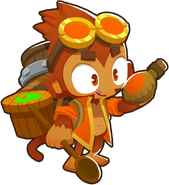 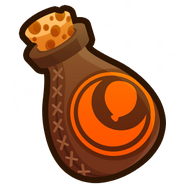