Restricted (darts, upgradable to 2/1/0 and requires another camo detection tower around the map)

Barbed Darts is the first upgrade of Path 2 for the Monkey Sub in Bloons TD 6. It increases pierce of each main dart from 2 to 5. For Airburst Darts, darts still split on impact but each individual airburst dart receives +3 pierce. For Bloontonium Reactors, pierce of the damaging radiation zone increases from 50 to 70, and gives +20 pierce for the decamo pulses of Submerge and Support and above.

Barbed Darts adds a red arrowhead on the top of the submarine's gun holder. For Submerge Subs and Reactors, the telescopes' lenses become red instead of green.

All darts including those burst from Airburst Darts gain +3 pierce. Base darts have 5 pierce. Armor Piercing Darts instead increases pierce from 5 to 8, while Sub Commander pierce increases from 9 to 12 because it receives its own buff. Reactors and Energizers gain +20 pierce.

Barbed Darts will produce more pierce potential overall compared to adding Twin Guns, but for the same cost it doesn't have as much early-game value in comparison. This is because a majority of the issues in early-game come from the faster bloons rather than grouped bloons. However, this upgrade can come in handy when extra dart pierce is necessary. 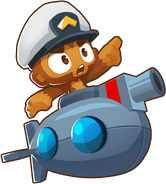 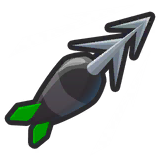