Not to be confused with the track, Banana Factory.

The Banana Research Facility (also known as BRF) is the fourth upgrade on Path 1 for the Banana Farm in BTD6. It increases the amount of overall income gained each round by producing crates of bananas instead of regular bananas. Compared to its BTD5 counterpart, the income gained is different, creating 5 crates worth $300 per round ($375 with Valuable Bananas), valued at up to $1,500 per round ($1,875 with Valuable Bananas).

Banana Research Facility upgrades the plantation of bananas into a banana production factory. It displays a banana logo at the front. There is a chimney that expels yellow smoke every so often, as well as a blue pipe at the factory's left (player's right) that chugs out liquid through it every so often too. The roof is slanted on the factory's right (player's left) and is apparently made of a long slab of concrete reinforced by three concrete sticks.

Banana Research Facility is a very expensive income option compared to other games, but when crosspathed with Valuable Bananas, it becomes one of the most efficient short-term Banana Farm options in BTD6, especially when paired with the global Banana Central buff. Although significant micro is needed to frequently collect the crates, it is easier to micromanage than Banana Plantations. Banana Research Facility often competes with Monkey Banks, as the Bank is considerably cheaper, doesn't require as much micromanagement, and is easily spammable because of these two benefits. However, it produces the highest amount of income per round for a single Banana Farm below Tier 5, making it the strongest at compact income generation, especially for creating the highest value Monkeyopolis sacrifices.

Banana Research Facility was nerfed too hard when it was first released in BTD6, so a considerable price drop for this upgrade was made in Version 2.0 to make the 4-2-0 crosspath become truly a highly cost-effective short-term income option. 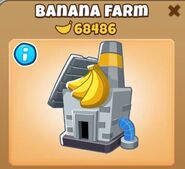 The same crates with the Candy Corn Bananas skin 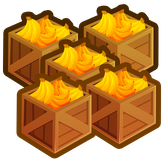