Banana Plantation is the third upgrade of Path 1 for the Banana Farm in Bloons TD 6. It produces 16 bananas per round instead of 8, valuing at $320 when all bananas are collected (or $400 with 3-2-0 crosspath, $416 with More Valuable Bananas).

Banana Plantation is one large banana tree that becomes four smaller trees and a cross river from an edge of farm. The Banana Plantation will no longer "jump" heavily when deploying bananas, but rather it will nudge upwards whenever it does so.

Total number of bananas per round is increased from 8 to 16, totalling $320 per round instead of $160 if all bananas are collected.

Like all Banana Farms, Banana Plantation generates bananas evenly throughout a round with respect to bloon send duration on a percentage basis. On a "short" bloon send round, specifically those with only one type of bloon send (e.g. Round 17 Regrow Yellows, Round 76 Regrow Ceramics, and all standard blimp debut rounds except DDTs and Bosses), all bananas produced in the round are pushed out very rapidly.

Banana Plantation greatly increases the total number of bananas produced each round. Although it produces many more bananas, picking up the bananas can be a bigger hassle, and the overall income generation rate is less efficient than that for Marketplace. Unless going for Banana Research Facilities later on, avoid spamming multiple Banana Plantations, as Marketplace is remarkably more cost-efficient and usability-efficient.

While still less efficient at income production compared to earlier Banana Farm upgrades or even the base Banana Farm, Banana Plantation's space efficiency makes it a viable option in situations where space efficiency could potentially be necessary. Marketplaces later dominated Plantations in their regard in later updates, but both options got buffed throughout history of BTD6. 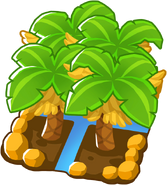 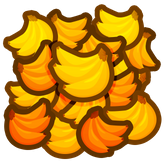