Yes (BTD6 only; a 2/x/x Monkey Sub will shoot at camo bloons in the Banana Farm's range)

The Banana Farm is a money-generating tower, and is the only tower (non-agent) that has nothing to do with actually popping Bloons. This tower made its debut in BTD4. The tower generates income every round, the amount depending on what upgrades you have purchased. The Banana Farm itself generates $80 per round and costs $850 on Easy, $1000 on Medium, $1080 on Hard and $1200 on Impoppable. It even gives money during Apopalypse Mode. It is generally a good idea to buy these early in the game, as you will get a bigger payoff.

The Banana Farm is bigger than other towers, even in its first form. There is a hut on the left side of the tower, and the hut is big as a regular tower. There is a field to the right of the hut, colored brown. Then there is a banana tree, right in the middle of the field. It is the largest unupgraded tower in the game.

The tower was completely reworked in BTD5; now it drops banana pickups 4 times a round ($80 max, or $120 with 4 pickups once you obtain Valuable Bananas), collect them with your mouse before they disappear. They last 10 seconds (20 with Long Life Bananas) and each banana pickup is worth $20 except for the Banana Research Facility which produces $200 (or $30 and $300 respectively with Valuable Bananas). The only way to make Banana Farms capable of increasing the amount of money each round would be to upgrade one Banana Farm to x/3+, where you could easily withdraw the cash at any time.

Due to the greater returns provided by the higher upgrades, it is wise to upgrade a Banana Farm as early into each game as possible.

Warning! The current game version on 23 February 2016 lacks the following: when you sell Banana Farms with Monkey Bank or Banana Investments Advisory, only values of the towers themselves are sold, while the money inside them is not withdrawn and simply disappears with the towers.

The following table shows how much money the Monkey Bank and the Banana Investments Advisory generate before the maximum is reached:

The Banana Farm has two forms in Monkey City. Initially, it is only available as a city building. It occupies a 2x2 space and provides City Cash over time, requiring one hour to fill to its capacity in Levels 1 and 2, or more if Level 3 or greater.

In order to use banana farms in-game, the player must first build the Micro Agriculture Development Building (or rather the Banana Farm Lab on Mobile), available at level 15. Then, the number of farms is dependent on the amount of city farms that one has (upgrading them to level 2 will have no effect on the in-game farms). In Monkey City, the Banana Farm and each of its upgrades provide a 50% greater amount in rewards compared to past versions of Bloons Tower Defense. This means each banana provides $30, each box of bananas $300, the Monkey Bank 675 + 10% each round, and have a capacity of $7500 instead of $5000, and the Banana Investments Advisory $1500 + 20% each round, with a capacity of $30,000 instead of $20,000. The upgrade Valuable Bananas will increase the reward to $45 and $450 for bananas and boxes, respectively. On mobile, they act like their normal BTD5 counterparts.

As with most towers in Monkey City, the cost of building on non-hardcore difficulty is the same as medium difficulty in BTD5.

For additional help to apply a solution, see table "Revenue (Income) of Bananas Towers" above.

Note: Dart Training Facility Level 3 might help a lot. Buy banana farms as early as you can. Upgrade each of these to 1/0 right after you buy them, and repeat until you think you have enough farms (3 to 6 is usually good). Upgrade each of the 1/0 farms to 2/0. Using a Village may help to lower prices. Upgrade each of the 2/0 farms to 3/0. Check if you can sell all but one farm to upgrade that one to a Banana Research Facility (4/1), which is worth it. This "pays" itself on a single round. This means the difference between buy and sell prices is evened in one round. Keep buying more farms while also strenghtening your defenses.

A Banana Farm is self-sustaining (that is, after the initial purchase it will provide enough money to pay for its own upgrades) on the following schedule (assuming that the Banana Farm is originally purchased at Round 0, and not accounting for Valuable Bananas):

Interestingly, the marginal increase in difficulty is greater in the escalation from Easy to Medium than it is from Medium to Hard.

However, if a player has the total cost of the Banana Farm available up-front, as depicted in the table below, a player can recoup the expense of a fully-upgraded banana farm as shown:

With the Valuable Bananas upgrade, the recoupment schedule for a fully-upgraded Banana Research Facility is as follows:

Thus, a player who purchases and fully upgrades a Banana Farm (4/2) on Round 0 in Easy will have the tower "paid off" in Round 7 and will begin making a "profit" in Round 8.

Buy this as soon as you can. upgrade to More Bananas, then buy 1 more. Upgrade them both to banana plantation, then keep making them until you have 11. Then sell all but one and upgrade to 4/2. Keep buying until you have 11. Then get a 2/4 banana bank each round. when they reach $20000, get money, sell, and place a 4/2 banana farm. Works best on clock and bloontonium lab.

The seemingly most efficient way of early game banana collecting is to Buy a farm as soon as possible, then quickly upgrade said farm to a 2/0. Then do the same with another farm. So you should have 2 2/0 farms Upgrade one to 3/0 then again, asap upgrade the other to 3/0. Then buy valuable bananas so they're both 3/2. After you have enough money to buy a 4/2 by selling a banana farm, do it Also from here they can choose what they want for additional income.

In BTD5 for PC, the amount of bananas given by a farm is determined at the very beginning of a round. That means, if you have a Banana Republic and upgrade it right after the round starts, the banana farm will produce 13 banana crates instead of 5 for that one round, totalling in an additional output of 2800$ (4200$ with Valuable Bananas). With a few tokens invested in Sell Price in the Monkey Lab to reduce money losses due to selling, selling and rebuying Banana Factories every single round to get 7 additional crates per farm becomes a viable strategy to further increase your income, even on Impoppable.

In Bloons TD 5 Mobile, the upgrades are the exact same as in the online version of Bloons TD 5, but each upgrade gives half the bananas they normally give with double income for each banana (or crate from Banana Research Facility). So More Bananas will only give you 3 bananas, but each banana is worth $40 rather than $20. The reason is probably that it is harder to tap bananas to collect them as opposed to simply dragging your mouse over them on the online version. This is worth it because for the Banana Plantation & Republic the number of bananas produced is rounded up.

Bananas now physically have to be tapped instead being drawn towards wherever is last tapped.

The Banana Farm has received a mix of buffs and nerfs via game updates, but has been buffed overall. It's arguably the most popular tower in the game, with a lot of tower loadouts using it. Popular loadouts include Dart Farm Ace/Bomb, Ninja Farm Wizard/Mortar/Bomb, Heli Farm Ace/Ice, and Dartling Farm Village.

Banana Farms can no longer be exploited to produce more bananas than normal.

Monkey Bank and Banana Investments Advisory now add $30 & $80 respectively to the player's economy at the start of a round.

Monkey Farmers are now available to be used in every battle if the player brings in Banana Farm in their loadout. Each Monkey Farmer costs

100 each, and last for an entire battle upon usage.

The Banana Farm has made a return in BTD6, with various new ways to gain income. Among these is a way for Banana Farms to collect income automatically without the need for a Monkey Farmer (which is also released to BTD6). One other interesting change is that it no longer has no abilities; it has got an ability to loan $10,000 with $5,000 loan interest and another stronger ability to give $10,000 instantly.

*For maximum efficiency, the money should be collected 1 round before it reaches full. note: this was before the bank nerf to 7000 max 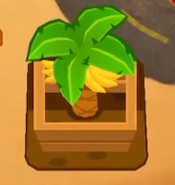 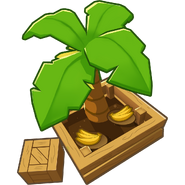 The tips appearing the first time the player builds a Banana Farm in BMC.
Add a photo to this gallery