Banana Central is the final upgrade of Path 1 for the Banana Farm in Bloons TD 6. It produces 5 larger crates of Banana worth $1200 each per round, as well as allowing all Banana Research Facility crates to become worth 25% more ($375). With the Valuable Bananas crosspath, the crates that spawn from the Banana Central are worth $1500 instead of $1200.

Banana Central is an enlarged factory of bananas. The building appears more futuristic than the preceding Banana Research Facility upgrade (which appears more industrial), with features such as a glass dome that protects the banana repository. When Path 2 upgrades are bought, the bananas and the Banana Central logo turn green.

Like all Banana Farms, Banana Central generates crates evenly throughout a round with respect to bloon send duration on a percentage basis. On a "short" bloon send round, specifically those with only one type of bloon send (e.g. Round 17 Regrow Yellows, Round 76 Regrow Ceramics, and all standard blimp debut rounds except DDTs and Bosses), all crates produced in the round are pushed out very rapidly.

Banana Central is best suited for preparing for late-game runs or Boss Bloon Events, whereby maximizing income is of greatest importance. Its role is to maximize income for all collectable-based Banana Farms, particularly Banana Research Facilities, on screen. It is most powerful when paired with immense group of BRFs (Banana Research Facilities), which can exponentially pay off the immense expenses per BRF, due to how each BRF closes the gap between the expense of the Banana Central and its income production buff to all BRFs on screen. However, a large investment by other means may be required before being able to afford a massive Banana Central army, so other forms of income gain such as Monkey Bank spam may be required first before then.

Although the Bank Deposits MK allows IMF Loan spam to become far more efficient at income production overall, Banana Central + Banana Research Facility spam is far less micro-intensive than the former option, because of how much less hand-eye coordination is required to scroll a finger/cursor over the screen repeatedly compared to excessive tapping on every individual IMF Bank's bank account for every little unit of financial transaction.

Efficiency is how many rounds a Banana Farm takes to pay its price. This is calculated by taking the total cost of a certain Banana Farm divided by its total income per round.

For Banana Central, the prices and incomes of all Banana Research Facilities are considered. 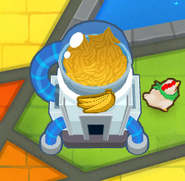 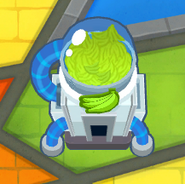 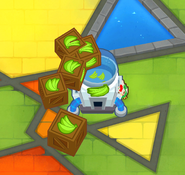 Maximally Ultraboosted 5-2-0 Banana Central, for a grand total of 16 crates 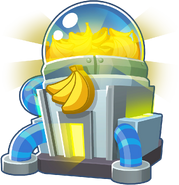 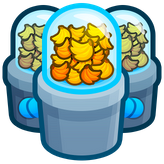