Bloons Wiki
Register
Don't have an account?
Sign In
Advertisement
in: Articles in construction with a WIP, Monkey Sub, Bloons TD 6,
and 6 more

Ballistic Missile is the 3rd upgrade for Path 2 for the Monkey Sub in Bloons TD 6. This upgrade adds ballistic missiles that shoot above the sky and crash onto target bloons on screen, accurately hitting targets without subjecting to projectile expiry. These ballistic missiles trigger within increased range (from 42 to 50). Once a bloon is detected in range, a missile is fired, following its target according to target priority. Adding Advanced Intel lets missiles trigger at any tower's range.

Each ballistic missile deals 1 damage each, deals an extra +5 damage versus Ceramics and MOAB-class, have 100 pierce each, and are shot every 0.994s (every 0.870s with Twin Guns, but no extra with Airburst Darts). The blast radius for a Ballistic Missile is approximately ~15 units radius. It takes 0.6s for a ballistic missile to travel between launch and hitting its target.

In the upgrade portrait, the monkey holds its fists up while two ballistic missiles fly simultaneously.

Ballistic Missile targets bloons using the standard target priorities. It has multiple types of attacks that are shot in different styles.

Darts are shot in a straight movement and automatically home at bloons with moderate seeking, having a tight seeking curve while traveling but does not make sharp turns. Ballistic missiles are shot in a lobbing style, launching in the air and crashing onto a target according to target priority prior to launching.

Ballistic Missile's high pierce compared to its cost makes it a good option for handling very dense clumps of bloons accurately. It can be used to chip down the health off Ceramic Bloons in early and mid-game rounds, as well as deal a reasonable amount of damage to MOAB-class bloons. Armies of Ballistic Missiles are not very efficient in later rounds compared to its BTD5 counterpart, but they are considerably cheap and possess quite high range, pierce, and accuracy.

Ballistic Missiles are low-cost for extra MOAB-class and Ceramic damage, but even with a slightly extra MOAB-class and Ceramic damage compared to BTD5, other popular tower options compete in their field of specialization. Crosspathing benefits have been added to this upgrade, changing the upgrade so that Path 1 gives infinite range missiles while Path 3 adds bonus attack speed in exchange for keeping limited range. Overall, Ballistic Missiles were buffed for all crosspaths since the game was first released.

A Ballistic Missile in BTD6 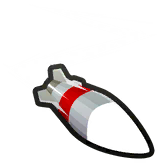 Ballistic Missile when it launches

Ballistic Missile when it falls