Ballistic Missile is the third upgrade along path 2 for the Monkey Sub in BTD5. It costs $1275 on Easy, $1500 on Medium, $1620 on Hard and $1800 on Impoppable. It allows the sub to fire missiles at bloons, as well as its darts. The missiles have infinite range (even though the missiles might miss and disappear) and pop Lead Bloons, but cannot harm Black or Zebra Bloons (similar to Bomb Towers). It does 3 damage to Ceramic Bloons and M.O.A.B. Class Bloons. Its blast radius is bigger than the Cannon Ship upgrade of Monkey Buccaneer.

This upgrade returns in BTD6, where it serves as the third upgrade of Path 2 for the Monkey Sub. Ballistic Missiles now shoot above the sky and crash onto target bloons on screen, which will increase reliability of the missiles overall due to the missiles not being able to disappear from projectile expiry. The missiles have extended range (from a range increase to this upgrade from 42 to 60), but not unlimited unless crosspathed with Advanced Intel. The missiles are shot every 1.5 seconds, each dealing 1 damage plus an extra +5 damage to Ceramics and MOAB-class bloons. Ballistic Missile costs $1400 on Medium.

Ballistic Missile will no longer target the Sub if the original target was destroyed. 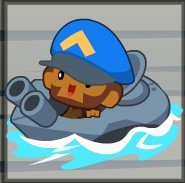 0/3 to 2/3 Ballistic Missile Subs, alongside an artwork in BTD5 Mobile and BTDB Mobile.

A Ballistic Missile in BTD6

Retrieved from "https://bloons.fandom.com/wiki/Ballistic_Missile?oldid=246877"
Community content is available under CC-BY-SA unless otherwise noted.