Ball Lightning is the 4th upgrade of the 1st path for the Druid, costing $5,100 on Easy, $6,000 on Medium, $6,480 on Hard and $7,200 on Impoppable. It makes the Druid shoot slow-moving electric balls that make additional lightning bolts. The Ball is shot every 6 seconds and the lightning from Ball Lightning spawns every 0.35 seconds dealing 2 damage to up to 30 bloons per lightning.

The Ball Lightning allows the Druid to launch a new type of projectile alongside previous spells from upgrades Heart of Thunder, Druid of the Storm, and typical Druid thorns, being the slowest moving projectile of all these attacks.

Ball Lightning itself fires off Lightning Bolt attacks from itself, attacking at a quick pace at bloons close to itself. If no bloons are present, it will not release these arcs of lightning. The slow movement, instead of hampering potency, helps to maximize the lightning strikes in this case, letting the ball attack multiple times to the same bloons.

Given the nature of the projectile benefiting from being in the range of bloons for a long period of time, using a Ball Lightning Druid similarly to a Juggernaut or Spike-o-pult would be ideal, allowing it to pass down the path and shock as many bloons as many times as possible before disappearing or going off the screen.

One important aspect for Ball Lightning can also be unlocked with Monkey Knowledge Point called "Cold Front", allowing the ball to freeze bloons it attacks. This allows for the Ball Lightning to at the very least stall and stun bloon for a short period of time before likely shocking them again, making it an interesting but sometimes a highly rewarding piece of knowledge to obtain when Ball Lightning is in play. 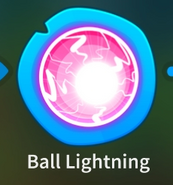 Lots of Ball Lightning attacks, alongside tornadoes from Druid of the Storm and thorns
Add a photo to this gallery
Retrieved from "https://bloons.fandom.com/wiki/Ball_Lightning?oldid=234184"
Community content is available under CC-BY-SA unless otherwise noted.