Avatar of Wrath is the final upgrade of Path 3 for the Druid. It allows the Druid to attack twice as fast, attack slightly further, deal +3 damage, and, most importantly, deals more damage the higher the RBE count there are on screen. Both higher quantities of bloons and bloons with higher HP will cause the Avatar of Wrath to trigger higher damage.

Avatar of Wrath represents wrath at its fullest. It becomes very, very red, from head to toe almost fully in red clothing, with full black for its wolf hood and black cape. Its druidic cloak, thick wristbands, and entire sleeves become red. The wolf hood becomes much more ferocious in appearance. On the official portrait, the Avatar of Wrath appears to be standing on a rock and screaming at the top of its voice while expressing extreme wrath with a flaming red aura.

Visually, the Avatar of Wrath appears to have three stages of wrath. It throws black bolts at its initial stage, red bolts at its second stage, orange bolts at its third stage, and at its final stage of wrath, it throws golden bolts.

The chart below shows how much RBE is needed to reach each visual stage of 'wrath'. Note that even when the Avatar of Wrath has reached the 4th tier of wrath, it is still able to increase its damage as it has not reached its actual cap (which is +30 damage at 90000 RBE).

Avatar of Wrath is extremely powerful when buffed and supported with the right combinations of towers, but is very weak on its own and tends to fail if certain towers interfere with the defense. It depends a suitable combination of support towers in order to become capable of single-handedly wiping out Rounds 81-100 with ease. Like the description for the Avatar of Wrath upgrade, "The more bloons there are, the more damage it does!", it is most effective when there is more bloon health in the round. Certain types of support towers may actually worsen its performance overall, and as such those towers should be avoided if utilizing the Avatar of Wrath to the max.

The Avatar of Wrath becomes very powerful when supported by increased pierce and increased attack speed. When supported by a high-level Obyn Greenfoot, 5 nearby Poplusts, and a Stronger Stimulant Alchemist, it is able to shred Round 98 with ease on most maps. Avatar of Wrath requires Monkey Intelligence Bureau to pop Leads, which would allow it to wipe out DDT rounds too if supported by slows such as MOAB Glue or Bloon Sabotage.

However, it becomes much weaker when using support towers that reduce HP of incoming bloons such as Unstable Concoction or Shattering Shells. Because those support towers drop total HP of bloons on screen, they will weaken the damage of each Avatar of Wrath thorn, which in turn do more harm than good for the defense. Unstable Concoction in particular may produce large swarms of Super Ceramics from exploded blimps, which may cause the entire defense to become overwhelmed.

On initial release, it was among the strongest Tier 5's at its time, especially with 0-1-5. As strategies become more developed by various buffs to more powerful options such as Apache Prime and Sky Shredder, Avatar of Wrath's role in the meta began to fade. However, Avatar of Wrath + Poplust + Obyn strategies remain popular among newer players and is one of the most efficient options on easier maps.

That being said, Avatar of Wrath received one buff to its weaker 2-0-5 crosspath, giving that path some superior grouped bloon value over single-target value. 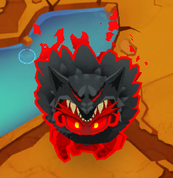 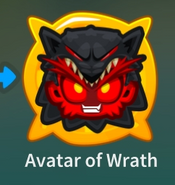 Second stage of wrath (red aura around the tower) 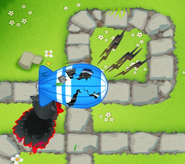 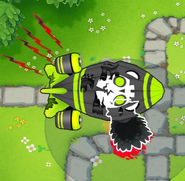 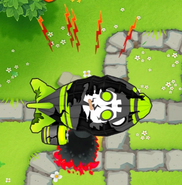 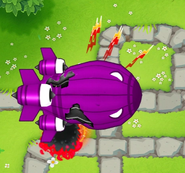 Bolts thrown at the final stage 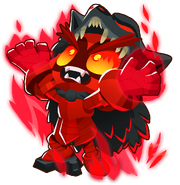 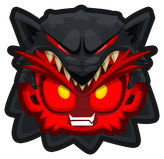