Upgrading its artillery from a single-barreled mortar cannon to become triple-barreled, it attacks 4x faster (rather than 3x like in previous versions), creating an attack every 0.27s. With the Bombardment ability active, it increases to every 0.0674s, almost the speed of a Super Monkey. Explosions deal extra damage to Ceramics (+3), Leads (+1), Fortified (+1), MOAB-class (+1), and stunned bloons (+2), and can also pop Black and Zebra Bloons, because Artillery Battery inherits properties from Heavy Shells.

Artillery Battery now features three black barrels on the Mortar, each barrel with two yellow stripes each. In the artwork, the monkey operating the Mortar is angrily trying to push a button while jumping up.

Artillery Battery is a strong option for popping various bloon types throughout the mid-game. It has decent pierce, allowing it to be useful at moderately dense bloons, but at the same time it can deal good damage versus MOAB-class bloons. With the 2-4-0 crosspath, it can be an effective option at handling various non-camo bloon types. However, the majority of its high-damage potential often relies on intense Mortar micromanagement, making it more of a hassle compared to alternate options. The ability can be useful for a burst of damage when needed.

Artillery Battery mostly has been given more attack speed to benefit its mid-game long-ranged explosive power.

Pre-27.0 Artillery Battery, which lacks an ability and only features 4x attack speed

Artillery Battery with an ability ready 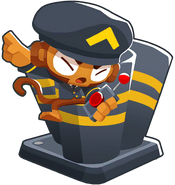 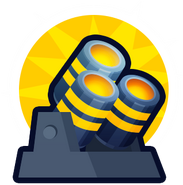 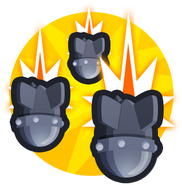 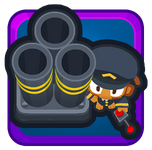