Bloons Wiki
Register
Don't have an account?
Sign In
Advertisement
in: Articles in construction with a WIP, Monkey Sub, Bloons TD 6,
and 5 more

Armor Piercing Darts is the fourth upgrade of Path 3 for the Monkey Sub in Bloons TD 6. It increases the amount of overall damage through its main darts and airburst darts, particularly versus MOAB-Class Bloons. The main homing darts fired by the Monkey Sub deal +1 damage to all bloons as well as deal another +2 bonus damage to MOAB-Class Bloons, for 2 damage and 4 damage respectively. Its Airburst Darts only deal +1 damage to MOAB-class bloons, but just this one damage buff alone makes this upgrade become a formidable force against MOAB-class bloons. Airburst Darts now also pop up to 5 bloons per dart instead of 2, for improved popping power against bloons too.

The sub itself now features a much more pointed prow and has grown larger; the prow's paint is also changed to a true navy blue, which coats the entire area leading to a fenced-off platform the monkey stands on. The rear of the sub bears an all-white paint job; the hull also bears visible riveting and plating. The guns themselves are painted a dark grey color.

The monkey now wears a white military uniform with gold buttons and cuffs, their cap turns a navy blue color, and their emblem is now yellow surrounding a gold chevron rather than black.

Crosspathing with path 1 grants the monkey a green cap and a pair of binoculars; unlike Triple Guns the monkey does not raise the binoculars to eye level, instead keeping them at its side.

Crosspathing with path 2 paints a red chevron above the base of the guns and then paints the prow bright red.

, for 2, as well as additional Extra Damage to Blimps

, for a total of 4. Meanwhile, the airbursts also gain Extra Damage to Blimps

Armor Piercing Darts specializes primarily on dealing great damage versus MOAB-class bloons, and as such is a good option against early MOABs. However, the extra base on-hit damage plus extra airburst dart pierce allows it to perform well against regular bloons too. Armor Piercing Darts, like its preceding and following upgrades, all benefit greatly from having essentially infinite range.

Do note that to become a top-tier early-midgame tower, it relies heavily on the bonus pierce and damage given from Alchemist buffs.

Armor Piercing Darts was overall buffed since it was first released. It now deals even more MOAB-class damage and the main dart bonus damage is stronger versus any single-target bloon. Armor Piercing Darts was later affected by the Airburst Dart attack pierce nerf, especially when interacting with Alch buffs. It still remains to have a solid amount of overall pierce, however. 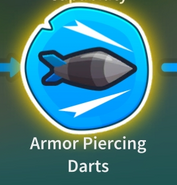 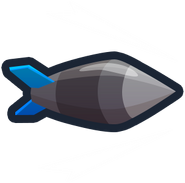