Slow:
Slows down bloons in range by 50%, does not affect frozen-immune

Arctic Wind is the third upgrade of Path 2 for the Ice Monkey in BTD6.

In BTD6, this upgrade is substantially different from the BTD4-BTD5 counterpart. Unlike earlier games, Arctic Wind doesn't come with extra range (although its succeeding upgrade Snowstorm does), it slows nearby frozen-vulnerable bloons by 50% (instead of 66% in earlier games), allows nearby land towers to be placed on water within range of the Arctic Wind, and has increased but limited pierce, increasing pierce from 40 to 100.

Arctic Wind has a unique capability of allowing any tower, including land towers, on top of nearby water. This also includes Sun Temples and the True Sun God, which apparently do not collapse into the water on which they are placed. If used to place a Support Chinook or Special Poperations Heli Pilot on water and is moved by that helicopter, both towers will be sold, even if there is no selling in the current game.

The slowdown from Arctic Wind has been nerfed considerably in BTD6; it now only deals a 50% slowdown. However, it still remains a viable option for slowing down large hordes of incoming bloons without relying on projectile attacks or abilities.

Due to the nature of the water-freezing portion of the Arctic Wind's radial arctic wind, it has caused numerous bugs, often a number of them game-breaking. The following bugs have been so far discovered: 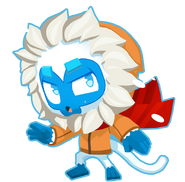 Instamonkey icon for Arctic Wind
Add a photo to this gallery

Retrieved from "https://bloons.fandom.com/wiki/Arctic_Wind_(BTD6)?oldid=269168"
Community content is available under CC-BY-SA unless otherwise noted.