Archmage is the Tier 5 upgrade of Path 1 for the Wizard Monkey in Bloons TD 6. It allows the Wizard Monkey to shoot bolts twice as fast as Arcane Spike, pop up to 11 bloons instead of 7 (12 to 16 with 5-0-1), deal 24 damage to MOAB-class bloons instead of 16, and 7 damage to other bloons instead of 5. Additionally, Archmage can use both the Dragon's Breath and Shimmer attacks alongside its normal bolt attacks at an extensive range. However, it does not come with benefits of the other lower Path 2 or Path 3 upgrades, and must be upgraded along either crosspath to gain benefits of either path.

Archmage is most useful for dealing considerable damage against groups of MOAB-class bloons. Against larger clumps of blimps, it can easily demolish them into much weaker bloons, but large clumps of Ceramics may spawn out of them. It is a good overall source of damage versus ordinary DDTs, and therefore can be used to beat Round 95 with minimal trouble, especially when paired with Overclock, but is only reliable on beginner maps. The Archmage is comparable to Pre-Emptive Strike, which also has the potential to spawn lots of Ceramics from destroyed weaker blimps, but without the single-target high-HP damage potential and with overall stronger but still pitifully weak Super Ceramic cleanup.

Due to its low synergy potential compared to alternative Tier 5 towers, the Archmage is often replaced with more favorable options at dealing high DPS, such as Perma Charge, Sky Shredder, or Grandmaster Ninja, which all can deal significantly higher ceramic and single target damage, be more versatile, and have similar prices to Archmage. Other less expensive Tier 5 towers such as Prince of Darkness, Super Maelstrom, and Sub Commander each have their own unique specializations and are more accessible in the later mid-game where they are most needed, in addition to scaling better in the late-game relative to their cost.

On the other hand, Archmage lacks a focused specialization, at best dealing high grouped blimp damage without adequate Ceramic-popping, and rather works best as a moderately expensive supporting DPS versus grouped MOAB-class as an accompany to the majority of more superior DPS towers. Adding Archmage to work well with a current defense can be difficult to do in practical CHIMPS games especially on Advanced and Expert Maps unless proper cleanup towers are added to balance its quick grouped MOAB-class damage with better Ceramic cleanup and high-HP blimp damage.

Most buffs for the Archmage are inherited from those that benefit the secondary Dragon's Breath attack, although Version 2.0 had made its main bolt attack considerably stronger as a counter to grouped blimps. Overall, it is somewhat stronger than it was when first released, and remains a popular option among newer players. 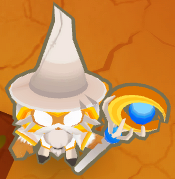 Archmage "No bloon shall pass!" 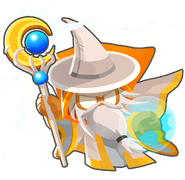 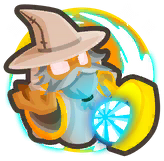