If purchased, Wall of Fire will obey set Target Priority.

Crosspath required (can be upgraded to 4/0/2)

Arcane Spike is the fourth upgrade of Path 1 for the Wizard Monkey in Bloons TD 6. It allows the Wizard's magic bolts to deal 16 damage to MOAB-Class Bloons, deal 5 damage to standard bloons, and allows the tower to pop Lead Bloons. Arcane Spike also attacks twice as fast as Arcane Mastery (every 0.275s instead of 0.55s).

Arcane Spike excels at dealing high damage to MOAB-class bloons. It becomes an effective option at handling mid-game bloons with its effective cleanup and can easily break apart multiple groups of MOAB-class quite accurately. Arcane Spike struggles versus grouped bloons, but MOAR Glaives can be paired to handle regular bloons prior to Round 81, and 0-1-2 Ice Monkeys from Round 81+ versus Super Ceramics. Pairing with Alchemist buffs, specifically with Berserker Brew or Stronger Stimulant, can reliably improve its overall performance throughout all stages of the game.

For late-game, it is good at handling MOABs and DDTs. Pairing with the main DPS towers plus support such as MOAB Glue and MOAB Press can give Arcane Spike an easier time handling groups of weaker blimps. It can also handle smaller groups of Super Ceramics adequately, although it benefits from support by the stalling power of 0-1-2 Ice Monkeys.

Arcane Spike is slightly stronger than it was when it was first released, mainly because of pierce buffs. It got a small price nerf, but reverted much later due to the redundancy of the price nerf as more players leaned away from Arcane Spike in strategical play, as well as the fact that the price nerf made Round 40 Arcane Spike much harder to afford on Hard in particular.

Arcane Spike in the upgrades menu 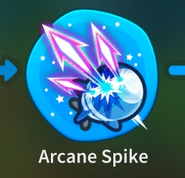 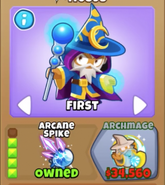 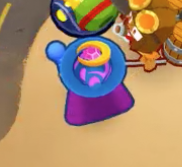 Arcane Spike with Monkey Sense, as viewed from the back 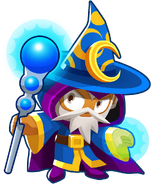 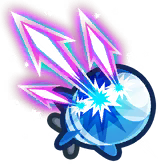