Crosspath required (can be upgraded to 3/0/2)

Arcane Mastery is the Tier 3 upgrade of Path 1 for the Wizard Monkey in Bloons TD 6. It enhances all of the Wizard Monkey's aspects, increasing attack speed, damage, range and pierce. With this upgrade, the Wizard Monkey attacks twice as fast (every 0.55s), its bolts deal 3 damage instead of 2, and its magic bolts have +4 pierce (7 without Intense Magic, 12 with Intense Magic). Its attack range is also now substantially larger, increased by +50% (+20 range to be precise).

Arcane Mastery is a very cost-effective tower that both cleans up bloons decently and can ignore Line of Sight. Much of its power comes from its mid-game power, whether it be early camo-popping power when given Monkey Sense or just high accurate damage in general.

When paired with Wall of Fire, Arcane Mastery can utilize the guided Walls of Fire more effectively, placing them into longer distances as a form of extra cleanup. This is on top of the large semi-accurate bolts with decent pierce. This makes it a potentially powerful option for dynamically controlling the Wall of Fire positioning based on bloon progress.

When paired with Monkey Sense, the 3-0-2 Wizard Monkey becomes an excellent source of Camo popping power until Round 45, where it cannot pop the Camo Purples on Rounds 45 and 48, and may struggle against the Camo Ceramics on Round 51. Until then, it serves as a great secondary attacking tower alongside more powerful offensive towers.

Arcane Mastery received only pierce buffs throughout the game. However, it is now considerably stronger at beating the late early-game rounds because of gaining extra pierce.

Arcane Mastery bolt has more pierce (6 → 7, from base Wizard buff).

Upgrade artwork in the upgrades menu 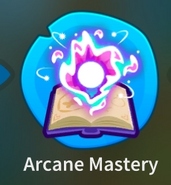 Arcane Mastery upgrade icon when shown on the upgrades menu 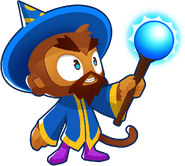 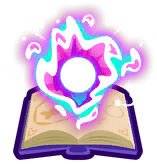 Arcane Mastery as seen in the main menu 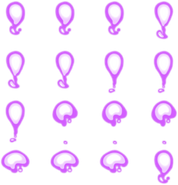