Angry Squirrel is a special agent in Bloons TD 5. Before bloons get past the player's defenses, the Angry Squirrel throws the same speed as a Dart Monkey and pops the same amount as a Dart Monkey, except it throws acorns instead of darts. But when Bloons leak, the squirrel turns green, with its attack range and speed increased. It can see Camo Bloons and pop leads when it is enraged. The rage lasts a few seconds. This agent is good if you are playing a really hard track or mode and you keep leaking bloons. The Angry Squirrel costs

60 to Purchase. It is best to have the Premium upgrade Healthy Bananas to make up for the live(s) lost. However, if you have the Angry Squirrel Pro, every 20 seconds it will become enraged, regardless of if you lost lives or not.

When this tower is placed in the range of a Meerkat Spy, and if a bloon leaks (losing a life), the Angry Squirrel will become green and fire fast and pop Lead Bloons and Camo Bloons, like normal, but it will not stop its rage. 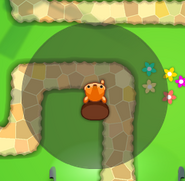 Range of Angry Squirrel
Add a photo to this gallery