Aircraft Carrier is the fourth upgrade of Path 1 for the Monkey Buccaneer in BTD6. Along with keeping its old Destroyer attacks, Aircraft Carrier now comes with three mini aircraft planes that rapidly shoot darts radially and forwards as well as regularly shooting anti-MOAB missiles similarly to the Fighter Plane upgrade. These anti-MOAB missiles are shot every 3.0s per plane, deal 15 damage, have 3 pierce, and has a blast radius of 30. The darts from the mini Aces pop up to 9 bloons per dart and deal 1 damage.

Because of how large the Aircraft Carrier is, it can no longer be carried by Support Chinooks.

Aircraft Carrier upgrades into a stationary aircraft carrier with a singular runway. It will not rotate whenever it attacks, but it will still shoot its main Destroyer attacks.

For greater mobility of damaging bloons, Aircraft Carrier is a viable option. The planes can deal high MOAB-class damage through its anti-MOAB missiles, while the darts act as a source of cleanup and extra damage. The reliability of the darts from the planes can be unreliable, and they cannot be buffed outside of external buffs such as Pat Fusty's Rallying Roar and nearby Monkey Villages.

Buffed on various updates to increase reliability of the planes and make it more usable compared to applying tower buffs to existing Destroyers.

Aircraft Carrier artwork as shown in the upgrades menu 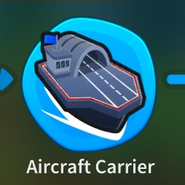 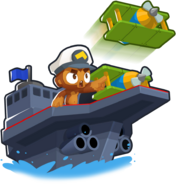 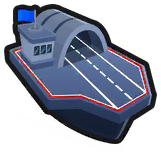