Aircraft Carrier is the final upgrade of path 1 for the Monkey Buccaneer in Bloons TD 5. It costs $12750 on Easy, $15000 on Medium, $16200 on Hard and $18000 on Impoppable. Its description says that it rapidly launches Monkey Ace pilots that strafe the area with darts.

The Aircraft Carrier launches three mini aces that keep on landing and taking off on the Aircraft Carrier. The Monkey Aces can fire in all directions. The Monkey Aces always fly in an O shape and are small. Unlike the usual Monkey Aces, each plane shoots two fast streams of darts from its front each as powerful as a non-upgraded Super Monkey (0/0). These mini Aces also regularly shoot 8 darts in different directions like a Tack Shooter.

In BTD6, this upgrade returns. See more on this page. 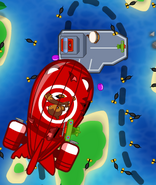 A Monkey Buccaneer with the Aircraft Carrier upgrade fighting a BFB 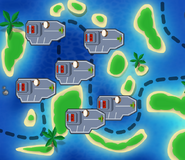 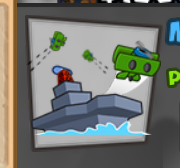 BTD5 Mobile/BTDB Mobile artwork
Add a photo to this gallery

Retrieved from "https://bloons.fandom.com/wiki/Aircraft_Carrier_(BTD5)?oldid=269476"
Community content is available under CC-BY-SA unless otherwise noted.