Restricted (upgradable to 2-0-2 and requires another camo detection tower around the map, or upgradable to 3-0-2 and submerged to decamo)

Airburst Darts is the second upgrade of Path 3 for the Monkey Sub in Bloons TD 6. Upon initial impact, the homing dart will split into three airburst darts (4 with the Quad Burst MK). Each airburst dart can pop up to 2 bloons each (+3 with Barbed Darts, +1 with Naval Upgrades).

The Airburst Darts upgrade is an incredible source of early-game popping power, soloing not just early grouped bloons but also early Fast Bloons, Black Bloons, and White Bloons. It pairs well with Advanced Intel to maximize its deployment of these powerful attacks.

Because any darts shot by the Sub seek out bloons, there's a very high chance the Airburst Darts will hit other bloons, clearing up grouped balloons that Twin Guns may fail against.

As for the further bonus attack speed for alternate attacks provided by this upgrade, Airburst Darts is helpful for improving the performance of Ballistic Missiles within specific range, and it is helpful with Submerge Subs for much faster decamo and Reactors if faster rate of damage is desired.

Airburst Darts are a powerful option in BTD6, especially when paired with Alchemist buffs. There was a small pierce nerf to Airburst Darts, but otherwise it's still a strong option overall for the middle early-game, and even later on in the game with later upgrades. Additionally, like Twin Guns, crosspathing variety to non-dart attacks were added to Airburst Darts. 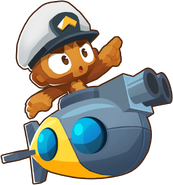 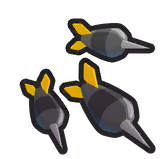