Airburst Darts is the second upgrade on path 2 for the Monkey Sub in BTD5. It causes the darts fired by the sub to split into three as they hit their target (four with the tier 3 specialty building and Quad Burst Monkey Knowledge). This greatly increases the number of bloons that the sub can pop. This is also a rather expensive 2nd tier upgrade, even more so in BTD Battles Mobile. In BTD5, it costs $635 on Easy, $750 on Medium, $810 on Hard, and $900 on Impoppable. In BTDB Mobile, it costs $1000.

In BTD6, this upgrade returns as the second upgrade of Path 3. Again, upon initial impact (or after hitting main dart full pierce cap, if granted pierce bonuses), the homing dart will split into three airburst darts (four with the Quad Burst MK). Each airburst dart can pop up to two bloons each (+1 with Naval Upgrades). It costs $850 on Easy, $1000 on Medium, $1080 on Hard, and $1200 on Impoppable.

Airburst Darts are now affected by external buffs such as Alchemist

Airburst Darts pierce reduced from 3 to 2. 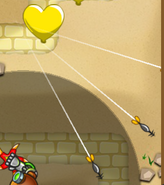 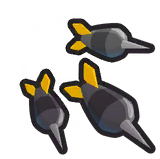 Instamonkey icon for Airburst Darts
Add a photo to this gallery

Heat-Tipped Armor Piercing Dart
Add a photo to this gallery

Retrieved from "https://bloons.fandom.com/wiki/Airburst_Darts?oldid=254993"
Community content is available under CC-BY-SA unless otherwise noted.