This upgrade changes the circular emblem on the monkey's helmet to a downward triangular one, adds a fourth barrel to the gun, and paints the green stripes wrapping around the gun purple.

All of the above apply to any non-tier 5 Dartling with this upgrade.

Advanced Targeting customly aims based on direction and angle of where the Dartling points towards. It shoots straight movement projectiles controlled in a aim-based mobile style guided by touch-based mobility, albeit with some erratic angular deviation.

Advanced Targeting is a straightforward upgrade, granting camo detection to the Dartling Gunner. It is a cheap camo detection upgrade, which essentially increases the total cost of the 0-1-0 Dartling Gunner to be $1100 on Medium. In effect, however, Paths 1 and 3 will become mutually exclusive. The good news is that Faster Barrel Spin is the next upgrade of the Advanced Targeting upgrade, which means Path 2 would be the favorable crosspath in most situations anyway. 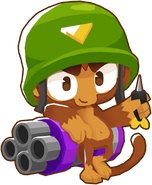 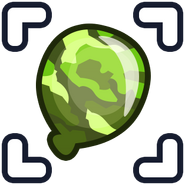 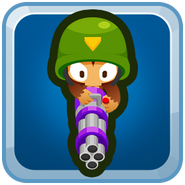