Admiral Brickell is a Hero in Bloons TD 6 who was added in Version 18.0. She is the first purely water-based hero in the game. She dispenses mines into nearby water and fires from her revolver. Her revolver pops one bloon at a time and initially deals 3 damage per shot. Each mine is dispensed around nearby water every 3 seconds and lasts for up to 2 rounds. Mines quickly home onto bloons once they are in close range of them. She can be unlocked with a one-off purchase of

In the 20.0 update, Admiral Brickell was given a new skin, Dread Pirate Brickell. The skin costs

Admiral Brickell will start upgrading herself every round upon placement. She earns more XP each round to unlock her next upgrade irrespective of how many bloons she pops. Her upgrades can also be immediately bought with cash, though the amount of cash required to purchase the next upgrade will typically increase as the upgrades get higher, making self-upgrading an important element for her overall power.

Admiral Brickell requires 1.425x more experience to upgrade towards each level compared to Quincy, Gwendolin, Striker Jones, or Obyn Greenfoot, which is as fast as Ezili's leveling curve.

Mega Mine: Deploys a huge Sea Mine capable of destroying big Bloons.

When Selected in the Heroes Menu:

Admiral Brickell is a very powerful Hero who can greatly empower nearby water towers (Monkey Subs and Monkey Buccaneers in particular) and can stockpile mines similar to a Spike Factory with Long Life Spikes or higher. When paired with Sub Commander and 2-0-3 Triple Guns or 0-3-2 Ballistic Missile spam, this becomes a mighty force whenever her Level 3+ ability is activated. Pairing her with a nearby Energizer is also very useful, because it makes her level much faster, further improving her abilities and her main attacks.

Her pistol is useful earlygame as an immediate attack, meaning she can quickly hit fast bloons such as spaced Yellows and Pinks on early rounds such as 14 or 15. As it does not improve much later on, this becomes one of the less relevant aspects of Admiral Brickell.

Her mines serve as stockpiles when a large number of bloons begin to reach a certain section. It should be noted though that mine stockpiles are terribly ineffective against leaking spaced bloons, since all stockpiled mines stacked near the same spot would just zoom towards the spaced bloons, effectively wasting the stockpiles' potential overall damage. This unreliability also means that the mines also becomes less relevant in the bigger picture.

Her Level 3+ ability, Naval Tactics becomes especially powerful on higher levels, and such an activated ability at higher levels can even eliminate the need to add a Monkey Intelligence Bureau or even a Radar Scanner nearby neighboring water towers. Level 14+ is especially powerful, as her buffs last far longer, which in turn has a significantly higher uptime overall. Additionally, this ability can buff Avatar of the Vengeful Monkey and Sun Temples if they are placed on water surface, effectively doubling their firepower, making her very useful in Freeplay Mode.

Her Level 10+ ability, Mega Mine, is great for stopping hordes of MOAB-class bloons and break down larger blimps into more manageable chunks, although huge numbers Ceramics may spawn underneath if not careful. Because Mega Mines only target MOAB-class bloons, although they can damage non-MOAB-class bloons, it is most useful when the Mega Mine is manually placed where the explosions can optimize their maximum range and maximum pierce. Mega Mines are especially useful for dealing damage to BADs, especially at Level 20 when her Mega Mines deal 15,000 damage instead of 4000.

Added to the game.

Admiral Brickell on the heroes menu

Admiral Brickell and a Level 10-19 Mega Mine

Level 20 Mega Mine and many standard mines

Admiral Brickell with a large stockpile of sea mines

Exploding mine
Add a photo to this gallery 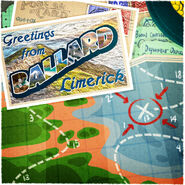 'Full speed ahead!'
Add a photo to this gallery 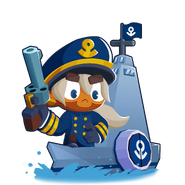 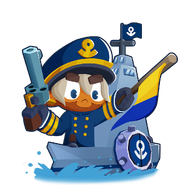 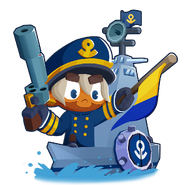 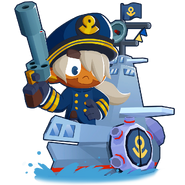 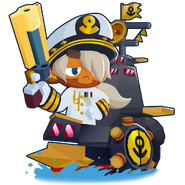 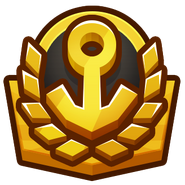 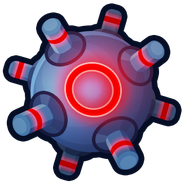 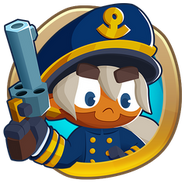 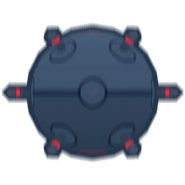 Level 10 Mega Mine (dropping from sky) 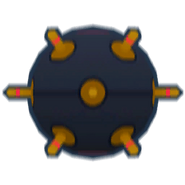 Level 20 Mega Mine (dropping from sky) 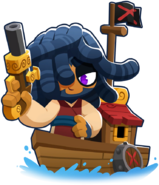 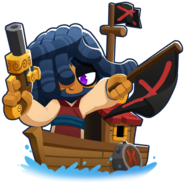 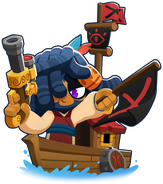 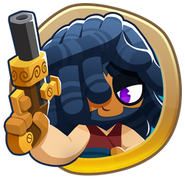 Dread Pirate Brickell Icon
Add a photo to this gallery

Retrieved from "https://bloons.fandom.com/wiki/Admiral_Brickell?oldid=268594"
Community content is available under CC-BY-SA unless otherwise noted.