Acidic Mixture Dip is the second upgrade of Path 1 for the Alchemist. It allows the Alchemist to throw separate potions every 10 seconds at non-passive towers (except other Alchemists, Benjamin, Etienne, Glue Gunners (without 2-0-0 path), Psi, and Paragons) that boost their popping power. These special potions sent at towers allow affected towers to pop Lead Bloons (but will not grant popping of Frozen Bloons) and deal +1 damage to Ceramic and MOAB-class bloons for the next 10 shots (or 13 with 2-2-0), and can be stacked up to have more AMD-buffed shots.

Unlike Berserker Brew, the chosen target is selected randomly, although it will choose the towers without Acidic Mixture Dip first before choosing any other towers. In addition, Acidic Mixture Dip can stack shot counts, up to 200, but brews cannot.

Alchemists with this upgrade can throw buff potions at nearby towers, giving them tower buffs. Acidic Mixture Dip is thrown on a random tower and prioritizes those without an AMD buff.

Acidic Mixture Dip was always popular as an anti-lead option and for improving damage to Ceramics and above. Overall, it has been buffed slightly, mostly from quality-of-life changes and crosspathing interactions. 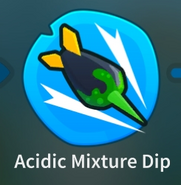 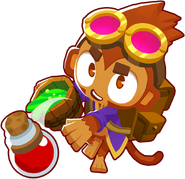 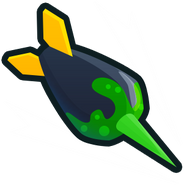