Absolute Zero is the final upgrade of path 2 for the Ice Tower in both BTD5 and BTD6. When used, it will freeze the entire screen of bloons for 4 seconds (including White Bloons and Zebra Bloons). In the mobile versions of Bloons, it also slows M.O.A.B. Class Bloons down to half speed (this can stack with Sabotage Supply Lines). Absolute Zero can affect White Bloons, Zebra Bloons, and Camo Bloons without the specialty building or X/3 Monkey Village. It takes approximately 15 seconds to recharge this ability on Fast Forward with no support.

In BTD6, this upgrade makes a return, but it is now a Tier-5 upgrade with a much more powerful ability. In addition, Ice Shards is no longer possible to purchase in combination with this upgrade, along with the fact that Arctic Wind is instead the upgrade that leads towards this upgrade. The Absolute Zero upgrade also has a less powerful upgrade counterpart Snowstorm. Its primary difference is that this upgrade can now slow down bloons more with its Arctic Wind, slowing down to 40% speed, increasing range and pierce (from 100 to 300) to affect more bloons and freeze more bloons with base attack as well. The ability freezes all bloon types including M.O.A.B-Class Bloons and frozen-immune bloons (Whites, Leads, Zebras) for a significantly longer time, and all Ice Monkey towers attack 50% faster for the duration of the ability. The freeze duration is now 10 seconds, an increase from 4 seconds for bloons and 1 second for blimps. It costs $22,100 on Easy, $26,000 on Medium, $28,080 on Hard, and $31,200 on Impoppable.

In BTD5 Mobile, it is noteworthy to know that the ability can also slow down MOAB-class bloons, not just normal bloons. Also, there is quite an outstanding difference in power between the Absolute Zero ability when compared to Sabotage Supply Lines.

As Absolute Zero is much more powerful in Bloons Tower Defense 6, it can freeze M.O.A.B. Class Bloons for a short time, which is great against D.D.T.s.

Permafrost can now apply to MOABs if crosspathed.

BTD6 Absolute Zero, with the base range boost buff in Version 7.0 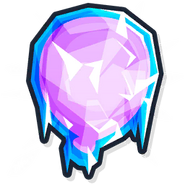 Retrieved from "https://bloons.fandom.com/wiki/Absolute_Zero?oldid=253817"
Community content is available under CC-BY-SA unless otherwise noted.