What's on your mind?

Been having some trouble with ceramics, anyone know the best way of going about efficiently popping them?

Alchemist Paragon... I’m pretty sure no one has tried this before, and for good reason. I apologize for this nightmare...

Description: Buffs and transforms every tower on screen... for the purpose of popping Red Bloons? Why is this necessary?

Attack description: Throws potions at Bloons and MOABs that do massive DoT damage, and coats MOABs in a substance that massively explodes when affected MOABs are popped. Globally applies enhanced Permabrew effects to all towers on screen, throws “rubber to gold” potions that make Bloons and MOABs give massive money when popped, and throws shrinking potions that can turn any non-BAD Bloon into a Red Bloon. Can see Camo.

Elite Transformation: Turns all Tier 3 and below Monkeys into crazy attack monsters for 30 seconds. When transformed, Monkeys have 80 range, Normal damage type, Camo detection, and shoot lasers at a rate of once every 0.02 seconds, with 20 damage (30 MOAB damage, 37 Boss damage, 75 Elite Boss damage) and 15 pierce. Lasts for 25 seconds; 30-second cooldown.

Permabrew potion [Degree 1]: Applied to towers every 3 seconds, starting with the towers closest to the Alchemist and ending with the ones furthest from the Alchemist. Can boost other Alchemists; cannot boost Paragons. Once applied to a tower, remains on that tower unless the Alch Paragon is sold. Can also stack with buffs from other Alchemists, leading to insane results when combined with a standard Permanent Brew Alchemist. Apply rate is affected by Degree.

Potions also turn Lead Bloons into Gold on impact, with +40 damage to Lead types. Leads give $100 when destroyed by these potions; DDTs are not turned into Gold, but do take the extra initial damage. Both attack speed and damage per tick increase with Degree.

Rubber to Gold [Degree 1]: Throws special potions every 4 seconds that turn affected Bloons partially into Gold, rewarding +300% income when they are popped. Affects non-BAD MOABs and soaks through all layers of MOAB and Bloon. Throwing speed increases with Degree.

Explosive potions [Degree 1]: Thrown only at MOAB-class Bloons, and thrown once every second with up to 10 pierce. When the MOAB is popped, creates an explosion that deals damage equivalent to 15% of that MOAB’s health to all other Bloons in radius; for example, the explosion does 4200 damage if a BAD is popped, regardless of round. Throwing speed scales with Degree.

Insta-shrink potions [Degree 1]: Thrown every 3.5 seconds, these potions have a massive splash radius, very high projectile speed, and up to 1000 pierce. These potions can shrink any Non-BAD Bloon into a Red Bloon instantly, regardless of health ramping. Insta-shrink potions have global range and are locked on Strong targeting. These potions also deal a straight 10000 damage to BAD Bloons, however this is less and less helpful in late Freeplay rounds. BAD Damage and attack speed scale with Degree.

I think that’s it; jeez this was tough to balance. Let me know if you have anything to say about this; feedback is always appreciated!

Is there anyone else who isn't excited for the engineer paragon? I'm not excited for the Engineer paragon at all because now I have to get 500,000+ XP for it. If you're wondering why I have so little XP for him, its because he SUCKS so I never use him. Anyone else have a similar feeling? I mean seriously, they could've used any support tower like Spike Factory or something but nope, they chose engineer.

So you know how the Elite Sniper gives "elite" targeting? what does that do and should I use the elite targeting or strong on cripple moab?

So, im new to btd battles 2, and the towers i use are sniper, alchemist, druid, and quincy for hero, im gonna get obyn in the future. Can someone tell me why this is bad? Because i feel like it is 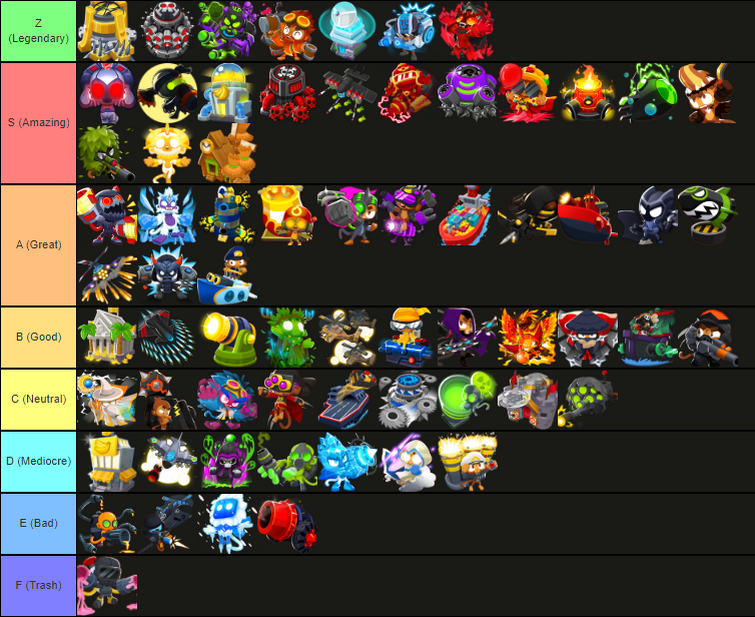 Average Scores for all Towers:

Terror of the Skies: (Monkey Ace)

Description: Face the wrath of a falling sky…

A highly advanced jet fighter taking after the B-52 Stratofortress and (currently in development) B-21 Raider bombers, (the B-21 in the shape and the B-52 for the size) this hulking behemoth of a plane has darts and bombs for weeks on end. The darts also have strong homing properties. It also carries several thermonuclear devices onboard that are mounted on MIRV chassis.

Note: All attacks are of course infinite range and the flight paths have radii summing to 80 (except Centered Path whose radius is 90)

Should be pretty obvious, this is THE META right now in btdb2

Bomb: overall a good tower for early, mid, and lategame

Sub: good at defending rushes, and first strike is quite useful

Ice: can help a lot of towers with its damage buff, and deals with ddts with impale

Sniper: an alt eco tower, can also help defend towers and give a damage buff with cripple moab

Alchemist: gives a useful buff, and total transformation can be useful lategame

Druid: overall a decent tower for all stages of the game although not particularly excelling at any stage

Wizard: can help defend rushes and is useful midgame with summon phoenix

Engineer: the only really useful upgrade is overclock and ultraboost which can provide a useful buff lategame

Mortar: good early and midgame, but struggles lategame and is map dependent

Glue gunner: can provide a little bit of support and helps against ddts, not very useful anywhere else

Super monkey: cannot be used earlygame, is too expensive

Spike factory: its just bad at everything

I mean, your immediate response would probably be yes right? But you don't get the block hole ability anymore, so is it really worth it? After a while, wouldn't the passive black hole ability of the legend of the night be better than the vengeful sun god? I'm just wondering because I have 12.7 million dollars on my round 280 game and I have the VTSG but I'm wondering if the Legend of the night will be more worth it later.

Basically what if it was just BTD 6 multiplayer but 4 players per side and each player gets there own corner however they can't share cash but each person have there own eco and communicate with each other to prevent people being able to have 3 people farming and one person defending while the 3 other people give cash to that one person. Then rush them with 100 Fortified B.a.d.s

Basically you can queue up for duos, trios or squads for each team and play together that way

Ice Monkey these days is fairly well balanced, though recent changes have made certain upgrades a little less effective than they once were and it's always had a bit of a crosspath problem. Here's what I'd do:

Enhanced Freeze is Ice's best base upgrade and it's not even close. I've altered it so that Deep Freeze is necessary for the permastall.

Embrit affecting MOABs is great, but in practice it's basically all you need to have because +1 damage and being able to pop any frozen Bloon is already pretty busted. As such I figured it could stand to be a bit pricier, while SBrit gets an effect it's been missing for quite a while (If you didn't know SBrit doesn't actually freeze MOABs)

Here's a fun fact: Thanks to Enhanced Freeze 410 Embrit has more than full uptime and it can actually freeze its own targets so Refreeze is literally useless. I've improved debuff duration so both paths get full uptime.

This is arguably not totally necessary but hey, if it's not gonna permastall it might as well get a little more slowdown some other way.

The Name The Inferno Blade Zone

Attack With His 32 Fire Blade, Attacks 30 Times For Second, And Every Tack Does 8 Damage, 10 To Ceramics, 32 To MOAB Class, 40 To Normal Bosses And 60 To Elite Bosses, Have Infinite Pierce And 55 Of Range,

His Other Attack Is Anti Bloon Fire, Attacks Every Second, His Damage is, Infinite to Normal Bloon Classes, 500 To MOAB Classes, And 1000 To Bosses When Attack a Bloon Make A Explosion With 20 Range With The Same Damage,

His Ability Is Turbo Inferno Blade Plague, For 5 Seconds Will Make a Lot of Very Fast Blades That Every One Make 80 Damage To Normal Bloon Classes, 120 To MOAB Classes And 180 To Bosses, His Recharge is 30 Seconds Cant Detect Camos

What should i use for the third unit?

I'm using ice rn, but it really doesn't do anything, except for icicle impale. But it costs a lot ;-; 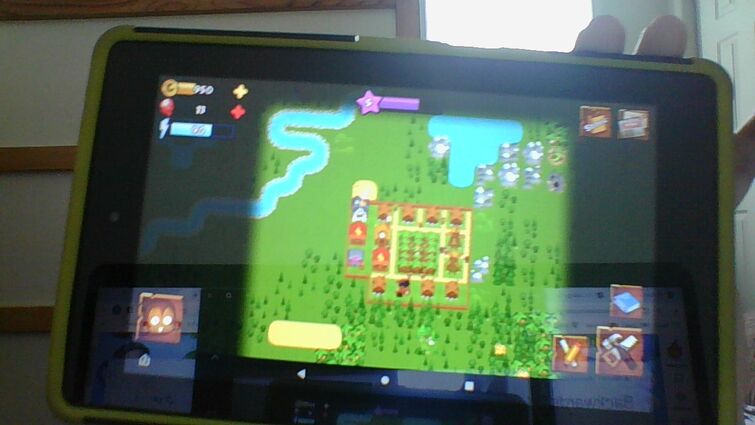 I had level 24-ish before